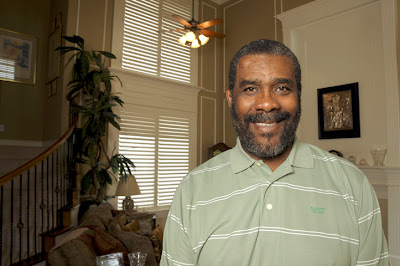 (Disclaimer: If It Ain't Steel waited to pay homage to Mean Joe Greene because the general thought last week was that he was referring to an erstwhile Steelers wide receiver when he spoke of an "attitude change" that he didn't like. We will not be pointing fingers anyone's way, though, but will rather simply wish the best for any and all who have left.)

"Mean Joe" Greene, and ostensibly the Pittsburgh Steelers, was born on January 28, 1969.

A week ago, Tuesday, May 7, 2013, after 27 years with the organization as a player, assistant coach and special scout, Joe Greene retired. He was the single greatest player in the history of the Steelers, was rated the No. 13th greatest player in NFL history by NFL.com, a five-time first-team All Pro, two-time Associated Press NFL Defensive Player of the Year, a 1987 Hall of Fame inductee and t.v. commercial legend.

Mean Joe was born in Elgin, Texas, and raised in Temple, Texas. His mother Cleo Thomas was his only family as his father abandoned the family when he was young. 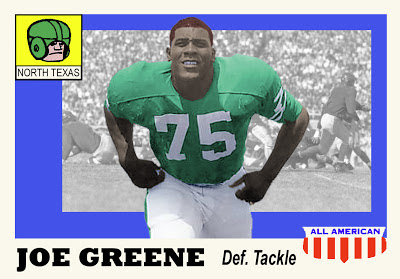 Mean Joe was always big, even in high school. At segregated Dunbar High where he started his life in football, he was already a man among boys at 6’3”, 225 pounds before he graduated. He would go on to attend the University of North Texas, (then North Texas State University), home of the "Mean Green" defense where his nickname originated. Though, entirely by mistake.

The Pittsburgh fan base assumed that the team nickname of "Mean Green" was Joe Greene's nickname; however, it was actually North Texas' head coach Rod Rust's wife who wanted to give a nickname to the team's outstanding defense. A defense that, per one source, "held the opposition to 2,507 yards gained on 1,276 rushes." Since green is the school's main color, she gave the defense the name "Mean Green". Though, the North Texan Online gives a slightly different version of it: http://www.unt.edu/northtexan/archives/w04/mean.htm

But it stuck nonetheless...especially considering he lived up to it. After the 1968 consensus All-American was drafted, the headline in Pittsburgh the next day read, "JOE WHO?" The Steel City soon found out. If you listen to former Steelers linebacker Andy Russell, Mean Joe was a fight waiting to happen. 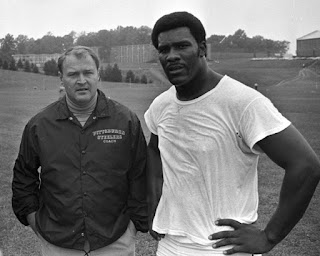 Russell, in his fondness for storytelling, has oft related, as has been chronicled by NFL Films, that Mean Joe once took Dick Butkus by the face mask and spit in his face...without retaliation from the Chicago son. Russell also has related a story about a Philadelphia game where he angrily threw an Eagles' helmet into the stands (which I swear that I remember seeing happen on an NFL Films presentation).

But a verifiable and detailed quote from Andy Russell about Mean Joe can be found in The Steelers Reader. Of a 1970 Eagles game, Russell related the following:

"Our offense had played very well with Frenchy Fuqua about to set the Steeler all-time rushing record for a single game, 218 yards. Despite his success running the ball, our defense, except for Joe who had four sacks, had played terribly and the Eagles were up by a couple of touchdowns and were about to score another when I heard Joe, in his deep, resonant baritone calmly tell the man playing across from him, "Man, if you hold me one more time, I'm going to have to hurt you."

Well, he made the courageous choice and chose to hold Joe. I heard a loud thump and a whooshing noise, as the guard lost all the air from his lungs. The player was lying there on the ground, writhing in pain with Joe, standing above him, quietly telling him, "Man, I told you not to hold me again."

The officials, missing the infraction, had a stretcher brought on the field to carry the injured player off. Moments later, the Eagles put in his backup, a third-year man, not exactly relishing his "opportunity." Before the first play, I heard Joe again explain the consequences of holding.

The backup, apparently deciding he'd rather be hurt than humiliated, also chose to grab Joe. Again I heard the cry of pain and there he was, lying on the field, clutching his stomach. Soon the second teamer also had been helped off the field and they sent in a rookie, also not particularly thrilled by his big chance to show his stuff.

Realizing the rookie was from North Texas State, Joe's alma mater, where they had been teammates together, I listened as Joe continued, "Now, don't you be holding me like those other dudes. You know how I hate that."

Almost from the moment the 6-4, 275-pounder stepped on the field in Black and Gold, he exhibited the talents that would establish him as one of the best all time. He was named the NFL Defensive Rookie of the Year in 1969 when he received the first of his 10 Pro Bowl invitations.

He had a career-high 11 sacks in 1972, the year the Steelers began recording sacks as a stat - 10 years before the NFL would officially do so, when he was named the AP NFL Defensive Player of the Year, his first of two. 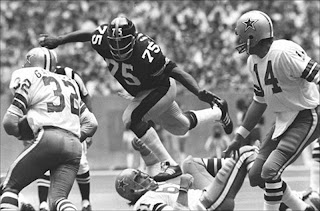 It was also the year the Steelers reached the playoffs for only the second time ever (first being in 1947). In a must-win game against the Houston Oilers, Mean Joe recorded five sacks (a Steelers record) and a fumble recovery that effectively sealed the victory. The legend was born.

A defining year for Mean Joe and the Steelers was 1974. He has said his most memorable moment with the Steelers came when they beat the Raiders in Oakland in the AFC championship game that year to advance to their first Super Bowl.

"That was always the highlight for me, going from 1-13 my rookie season to all the years we worked hard and really didn't get to the game ... That was just the best moment, and then we kept stacking moments on top of that, but that was the one for me.

"Winning the Super bowl was obviously a great one but the joy I felt of going to the Super Bowl, it was what I felt about the Pittsburgh Steelers and where we came from, the history of us to that point." - http://tinyurl.com/adwrbcm

Also that season, Mean Joe "developed the new tactic of lining up at a sharp angle between the guard and center to disrupt the opposition's blocking assignments. Against both Oakland in the AFC title game and Minnesota in Super Bowl IX, Greene was virtually unstoppable."

From 1969 to 1979, Mean Joe was either an All Pro, earned All-Conference recognition and/or was elected to the Pro Bowl. He would record 78.5 sacks in his playing career, second all time for the Steelers (Jason Gildon leads with 80). He retired in 1981 being the bearer of four Super Bowl rings.

Football may have been Mean Joe’s life, but he also made several TV and movie appearances. But his most famous thespian excursion aired in October of 1979. - http://youtu.be/xffOCZYX6F8

That Coca-Cola commercial, in which a child gives him a Coke and in response “Mean Joe" smiles and gives the kid his game jersey, became so popular that it spawned a 1981 t.v. movie called "The Steeler and the Pittsburgh Kid," starring Mean Joe and teammate Franco Harris as themselves, the Dallas Cowboys' Harvey Martin and Henry Thomas, of E.T.: the Extra Terrestrial "Eliot" fame, as "the kid." It also became a part of pop culture. 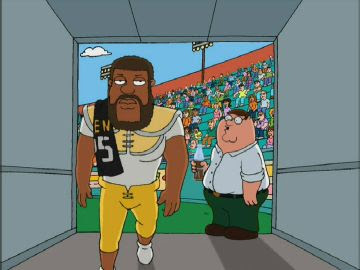 After some time away from football, he returned to the team in 1987 as the defensive line coach under Chuck Noll and stayed at the position for five years. Mean Joe would go on to have stints with the Miami Dolphins (1992-95) and Arizona Cardinals (1996-2003) and briefly as an analyst for CBS Sports. He would return in 2004 when Steelers' general manager Kevin Colbert hired him as his special assistant for player personnel. In Mean Joe's 27 years working for the Steelers, he earned six Super Bowl rings, second most of any coach or front office person.

We will miss you, Mean Joe. We will always remember that you fondly and will never forget that you were the cornerstone of the bulwark known as the Steel Curtain, and of the dynasty known as the Pittsburgh Steelers. Thanks, Mean Joe. 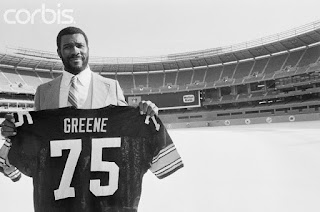